@Freeman Cruisers discussion forum. For owners and fans of the Freeman Cruiser range built in the UK by John Freeman (Marine) Limited. These well built boats can regularly be seen cruising the inland waterways of the UK.

I was perfectly content with my new F23 a few weeks ago until this weekend when i met a follow on the canal bank that gave me all sorts of worries.  He looked worryingly when i told him i had a petrol engine, he told me all sorts of stories as how they could be dangerous and was worth any amount to convert to diesel.....someone please tell me that this is ill founded and i shouldn't be listening to such people....i was only glad herself didnt hear or it would be her last time on the boat!

Words of wisdom and reassurance most welcome 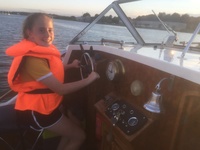 Your Freeman and hundreds more have been safely operating on petrol for up to 50 years, so any alarmist uttering are just that !

I would direct you to the BSS safety notes that are in the Publications section, see here for some tips.

[You must be registered and logged in to see this link.]

And in particular here

[You must be registered and logged in to see this link.]

Normal sensible precautions should be taken when dealing with petrol, don't forget fumes will sink to the bilge and not escape like on a car.

Treated sensibly you will be perfectly safe, and have an engine that is both quiet and economical . Good luck and welcome to the forum and the marvellous world of Freeman ownership.

Thanks guys, appreciate the feedback.  I have a bilge blower installed so it will be part of my routine every time...i will take less notice of canal bank chat next time

There is a risk associated but in my mind no greater than with LPG which is installed on almost all boats.  Just as lots in life with the 24hr news culture and forums, everyone is made aware of every single incident and then portray on it to be the norm!

[You must be registered and logged in to see this link.] wrote:Hi all,

....someone please tell me that this is ill founded and i shouldn't be listening to such people...

Just make sure your bilge blower is a sucker. It should be pulling fumes out of the engine bay and expelling them safely off the stern, not blowing air into the bilge. If it isn't already it's a good idea to wire your "bilge sucker" into the ignition switch so it comes on and stays on as long as the engine is running. It's all too easy to forget to switch it on if the fan on a separate switch.

Actually you want to run your bilge blower (sucker would have perhaps been a better description) for a few minutes before you start the engine, so wiring to the ignition won’t help. Once the engine is running you can switch it off as the engine itself is consuming more air than the blower.

I installed an automatic fire extinguisher into my engine bay as an added precaution. In the unlikely event of an engine fire, it will be starved of oxygen almost immediately.
Personally I went for the non residue version, a bit more expensive, but I’ve seen the result of a powder extinguisher being set off in an engine bay (on a car) it took a lot of cleaning up

Using the bilge blower most of the running time but not necessarily, will tend to remove heavy fumes from the engine space which otherwise may be unhealthy for crew and your dog. Engines so old are not necessarily in perfect condition!

A while back I was corresponding with the EA about petrol safety and in a reply the local officer made this comment:-

"... there is very much a ‘turn the key and go’ mentality out there, and as many people don’t look under their car bonnet if it runs okay, the same may be true of boats.  When one can pick up a used petrol boat of 1960s – 1970s vintage for the price of an affordable second-hand car, it’s very attractive to the inexperienced; and they may not understand / be motivated to realise the difference, or consider how essential good maintenance and best-practice behaviour is. "

Where people get into trouble may arise from the modern unfamiliarity with engines and petrol (which you never actually see or smell any more when fuelling a car) and are just unaware of the risks from leakage seepage or spillage. When out in my boat I never stop smelling - if you understand me!

[You must be registered and logged in to see this link.] wrote:Using the bilge blower most of the running time but not necessarily, will tend to remove heavy fumes from the engine space which otherwise may be unhealthy for crew and your dog.

No, not really....take a minute to understand the dynamics of the airflow

The engine is drawing off all of the warm air from the top of the engine bay. Even tootling along at 4 mph, your engine will be drawing in the region of 500 litres of air per minute. All of that air is being drawn along the bilge where it is cooler, so will naturally sit at the bottom of the engine bay until it’s drawn up by the engine.

I have to slightly differ! The theory may be one thing; the practice can be different. The commonest reason for unreliable running in our boats has been an overheated coil. I suggest the radiated heat from the block/manifold is not (sufficiently) removed by the induction process, nor escaping sump fumes. And running the blower most definitely lessons smell, even in the cockpit. Of course, only speaking personally, about my own boat! And what my dog finds too!

The overheating coil scenario isn’t related to air temperature it’s because the the internal insulation is breaking down.

My sump and crankcase vents are plumbed directly into the induction system.
_________________
Freeman 33 Sport - Water Magic
Moored on the Thames at Oxford

For new members its perhaps worth saying that the Vice-Admiral (Prof as in Professional!) is professionally employed in engineering design (Motor racing) and knows what he's talking about.

So, well-intentioned coil mods once aired here (even water cooled!) were off the mark?

But everyday is still a school day, both at work and on the boat

thank you guys for the healthy debate....cant say i understand all of it but my take away points are use my blower and make sure my blower is a sucker

Ah ha - that minute or so AFTER mooring, and after shutting off the engine, is when those dripping-carburettor petrol fumes could accumulate for next time! What other people think need be no concern of mine. Who's the Master of my craft? Ha ha!

My rule (poor sod. or poor companions, I hear you say) is that everything should be done with Naval discipline, and every coiled rope and every other thing immediately back in place and correct for 'next time', perhaps in a few second's time in the event of the sudden unexpected. Accidents, or leaks, shouldn't happen but they do.

Yup, leave it on for at least 5 minutes, take some of the heat and any vapour away before it accumulates in the bilge

I don’t have a bilge blower but I do stick my nose in the engine compartment frequently. I know how it should smell so when it did leak I picked up on it. It’s warm in there so if the leak is small the petrol will evaporate to vapour...but then it’s vapour that ignites not  liquid.

"Trillium" has been running since 1967 without any form of bilge blower or sucker or anything similar. She has the simplest form of precrossflow Ford petrol engine, as fitted by the factory, and has covered thousands of miles in my posession with no explosions or other similar stuff. Yes, petrol does tend to sink into the bilges; but what happens after that?? All petrol vapour will slowly disperse. Stick your nose down there and have a good sniff...if petrol vapour didn't disperse, then the bilges would be awash with the stuff...and they aren't.
I have spilled the stuff into the bilges and engine bay many times since I bought the boat in 1978, and the stuff must have gone somwhere...probably, as the Prof. says, through the engine and out of the exhaust. I do not, personally, consider that there is any need for seperate mechanical bilge vapour draining devices... or Freemans would have fitted them.
Modern petrol, which includes ethanol, isn't compatible with the rubber seals used on early fuel systems such as ours..so keep a good check on all pipework and carburetter joints to ensure they don't leak. Internal carburetter drillings can get blocked and the boat fuel pipelines also get blocked; I recently changed mine and the stuff that came out......(!) So use ethanol free fuel; usually top grade petrol that costs a bit extra but has nothing added to it. I do use an octane boosting additive, but that's just for personal choice...there's no need for it.
Any pronouncements of doom from those with similar petrol engines can simply be discounted, on the basis of my 40 years of experience with my 22mk2.

Your 40 years experience isn't untypical but there is a new generation of owners coming along and everything you say is valid in the well maintained engine and ancillaries under they eye of an ever-watchful and experienced person.
My concern - my post dated August 8th above -  and the advice from the EA river inspector that boats are being bought by a new generation unfamiliar with engine maintenance or the risks and precautions surrounding petrol. (Their first car or any won't have been the £40 or even £4 pre-MOT banger that some of us started with). For safety's sake the point is that they should be aware, or become aware.

[You must be registered and logged in to see this link.] wrote:.... So use ethanol free fuel; usually top grade petrol that costs a bit extra but has nothing added to it. I do use an octane boosting additive, but that's just for personal choice...there's no need for it.....

Esso premium fuel is claimed to be ethanol free so that's what I've got in mine.

Currently the ethanol levels here are lower than Molemot territory, the lower levels are less of an issue to us, so I’m running a blend of standard 95 and the premiums with even less ethanol.

The one time I filled the tank almost completely with premium, we broke down and I found the float bowl full of varnish. Never seen it before or since
_________________
Freeman 33 Sport - Water Magic
Moored on the Thames at Oxford

Hmm! Ive run mine with tesco momentum for years as I cant be bothered changing pumps when Im filling up the car. Never missed a beat on it.

Hmm! Ive run mine with Tesco regular for years as I cant be bothered changing pumps when Im filling up the car. Never missed a beat on it. The Officer Cadet perhaps has a more appreciative car than I have!
Have thrown in the odd gallon of '4* leaded' (for the boat, not the car) when passing through Marlow where the Ford dealer still sells it for vintage cars and lawnmowers.
However, too, discovered this site as a matter of interest. Asda petrol cheaper still! https://www.petrolprices.com/ If any one brand has advantages is up for discussion - and plenty of discussion on the web, Honest John etc.


Most active topics
Who is online?
In total there are 3 users online :: 0 Registered, 0 Hidden and 3 Guests

Most users ever online was 179 on Sun Jan 31, 2021 11:38 pm
Most active topic starters
Statistics
We have 535 registered users
The newest registered user is dbates1623